I mentioned in my last post that I had a trip to Coventry planned and that I was hoping to bag a few Norton's for the Real Classic Norton Challenge Find out more about it here!.  With the XBR all loaded off I set off on a glorious sunny day and thoroughly enjoyed the experience of riding alone.  My first Norton was directly en route on the A5 - Norton Canes. 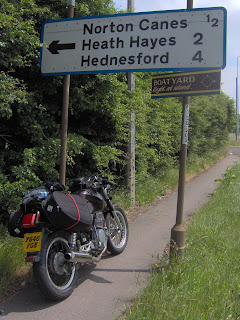 The next Norton was in Leicestershire and required a slight detour - Norton Juxta-Twycross.  The detour was along a very nice stretch of road and it was nice to be riding somewhere just for the fun of riding. 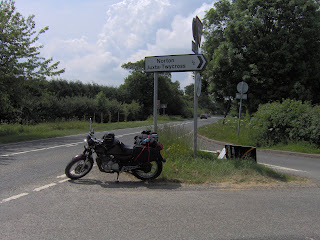 The next Norton was near to Daventry so I ended up riding beyond my final destination in Coventry.  The ground next to the signpost was rather soft so the bike is actually leaning on the signpost as I didn't trust the sidestand not to sink into the ground.  At this point the weather was still gloriously sunny, with a few clouds beginning to appear. 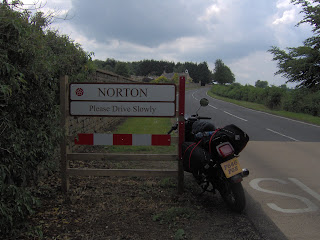 After this, I headed back in the direction of Coventry, looking for somewhere to fill up with fuel as I don't yet have any idea of how many miles an XBR tank of fuel will cover.  It soon started to rain but as I didn't have far to go and the rain didn't seem heavy I decided to wait for the fuel stop before stopping to pull on waterproofs.  I hadn't ridden in rain for a long time and was feeling a little paranoid so just plodded on.  I found a fuel stop and it seemed as if the rain was easing off so I decided not to bother with the waterproofs.  This proved to be a mistake as a few miles up the road the rain became persistantly heavier and I was torn between carrying on, as I knew I was nearly there, and stopping to don waterproofs.  Once again, I made the wrong decision.  It turned out that Multimap had lied about which roundabout the hotel was next to.  After riding around aimlessly and confused for a while, I pulled into a petrol station to ask for directions.  The cashier claimed not to know where the hotel was but kindly sold me a local street map.  I belatedly pulled on the waterproofs and looked at the map.  It didn't help much other than to confirm that the hotel couldn't be far away. After some more riding up and down and round and round a selection of roundabouts, I spotted the hotel and realised I had actually ridden past it about four times already.  By this time there was thunder and lightning and spectacular amounts of wet stuff falling from the sky and bouncing and splashing off the road.  I had also gone way past the feeling slightly paranoid stage!  It also crossed my mind that if I hadn't gone Norton-bagging I would have arrived while it was still sunny.  I figured that it had been worth getting wet for but was glad to get into a warm, dry hotel room, have a shower, get into some dry clothes and head for the bar.  More drinks followed later with some lovely peeps from the excellent Classic Bike Forum and I eventually fell asleep in the pub as a result of no food and too much drink.  Not my finest moment and the less said about that the better..............I have lots of not finest moments, btw, but most of them don't involve falling asleep in pubs thankfully!
It took the next couple of days for my riding clothes to dry out and I set off in torrential rain which persisted all the way home.  That was fun!  I took the M6 toll road just so there were less lorries and spray to contend with.  As I pulled up at my house and turned the bike around, the rain stopped and it didn't rain again for the rest of the day.  Deep Joy!
Posted by sfb at 14:42