A few months ago I bought an XL185 (Herbert) on ebay for the grand sum of £461 - twelve months MOT & tax and running ok.  I've done a few bits and pieces to him in readiness for the forthcoming trip to Spain - fitted a tool box, new rear mudguard and new rear light.  The plan was to take the Tribsa but it decided to spit out all it's oil via the engine breather.  I was told it would need a top end rebuild and to check the oil pump.  I checked the oil pump, following some advice on the Real Classic message board and the results suggested that the oil pump was at fault so I ordered a new one from the nice chaps at Supreme Motorcycles.  It has been sat on the work bench since then, simply due to lack of time and energy.

A few weeks ago, I spotted another XL185 for sale in Old Bike Mart - same year as Herbert and at a reasonable price. As I was worried whether or not the Tribsa would be ready for the trip to Spain, it occurred to me that another XL would be a good investment.   After a couple of telephone calls, I was on my way to a village near Bath in Somerset to collect a new brother for Herbert.  The trip was great - the seller mentioned having a couple of other motorcycles and asked if I might like to have a look.  Silly question!  In the huge triple garage were lots of interesting motorcycle shapes covered in blankets and a tour of the garage began.  It turned out he was a Norton enthusiast and I lost count of how many there were, including a couple of TT models.  I've been in smaller, less well-stocked museums.  Shame I didn't have my camera!  Eventually, money and motorcycle changed hands and I was on my way home with Horatio.

Soon after, I drained all the oil and started to take Horatio apart, looking for the centrifugal oil filter so I could give it a clean - this is due every 5,000 miles and Horatio has done over 8,000 miles.  The filter turned out not to be too bad but there was some crud so I gave it a good clean.  Unfortunately, the small thimble-like filter behind the drain plug met with an unfortunate end (it got crushed) so I had to order a new one before I could re-fill Horatio with oil.  Finally got around to doing that this week.  He started and ran nicely, much to my relief.  The exhaust and silencer had been bodged together and it was blowing around the join so I took the silencer off and after some hammering, cleaning with a wire wheel and painting, I bodged the assembly back together - it still blows a bit but it has improved and certainly doesn't sound obnoxious. He's all ready to go.

Gus has been a-visiting this week and spent many hours in the back garden fettling the two XLs and the Tribsa.  Herbert needed rather more work than Horatio - some very strange wiring had gone on and the rear light and brake light had stopped working.  This problem was eventually solved although it wasn't particularly straight-forward.  There was then a nasty problem with the head bearing - again this has been resolved.  Herbert has also had his centrifugal oil filter cleaned (he has done something over 11,000 miles) and the drain plug filter replaced.  I'm not going into too much detail - you can read more about it here (with piccies): http://www.classicbikeforum.co.uk/viewtopic.php?f=5&t=2971

The shakedown run on the two XLs proved satisfactory - Herbert makes a strange noise sometimes when slowing down but we suspect the brake might sometimes be rubbing - it doesn't seem to be anything more serious than that.  It is strange that, although the two bikes are both 1981 models (although one is X-reg and one is W-reg), Horatio feels more substantial to ride and there are lots of cosmetic differences between the two.  I enjoy them both though - I would be hard pushed to choose a favorite.

Now the two XLs were sorted, Gus turned his hand to the Tribsa, fitting the oil pump, repairing a side panel (tapping a metric hole to mount it with - now, that should upset the purists!) - again, you can read about that in more detail here http://www.classicbikeforum.co.uk/viewtopic.php?f=6&t=3508

With all three bikes fettled, last night was time for the Tribsa's shakedown run so we took him and Herbert out for a quick ride, taking in a flat but bumpy track.  There were some nice deep muddy puddles so I ended up rather wet and grubby.  This was all rather easy on Herbert and I wondered how easy the Tribsa would be "off-road" as he still has road tyres on.  I rode the Tribsa for the second part of the track and the puddles were probably deeper and muddier, but less avoidable, so I got wetter and muddier.  Although the Tribsa felt heavier, it was manageable and coped well and I felt as happy on the Tribsa as I did on the more suitable Hondas.  My main gripe was the throttle grip which seemed excessively heavy and unresponsive - this is a new problem so I have order a replacement from Supreme Motorcycles and should be able to fit that tomorrow.

With all three bikes fettled and assurances that most of the tracks we will be riding are do-able on road tyres, we are taking both the XLs and the Tribsa to Spain.  I've packed lots of tools ready for the trip!

Ideas are afoot for having two sets of wheels for the Tribsa - an off-road set with knobblies for Red Marley and a road set.  I'll be working on that after the trip to Spain. 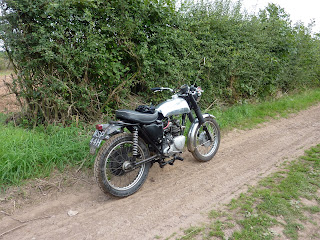