Ariel 3 - getting Larry in the mood for engine piccies!

Before I managed to "win" the Ariel 3 engine on ebay (which turned out to be damaged but I couldn't be bothered to argue the toss with the seller) I drafted a Wanted ad to be included in the NACC magazine "Buzzing" requesting a spare engine and any other parts.

As a result, today I had a phone call from a very nice chappie called Chris who has had a complete Ariel 3 sat in his shed for a long time and who would be quite happy to accept £30 to be rid of it.  It is all in one piece but it is located near Gatwick (about 3 hours away).  I don't know if this is a "girlie" thing but I did ask what colour it was - I always really wanted the snot-green one - he confirmed it was largely snot-green with brown (rust?!) bits.

To me, snot-green is the correct colour.  This is mainly because of a BSAOC trip to the most excellent transport museum in Coventry, back in 2006.  At the time there was what can only be described as a "snot-green" corner, which I remember included a snot-green Ariel 3, a snot-green Allegro and a snot-green Marina.  You'll be disappointed that I don't have a piccie of the Marina but, for your delight, I do have piccies of the Allegro and the Ariel 3. 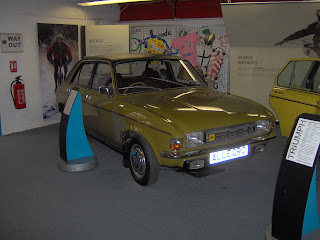 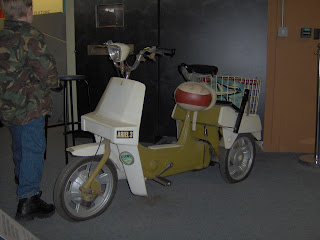 Of course, only a complete fool would drive 3 hours each way to collect such an abomination as an Ariel 3.  So. to prove I'm not such a complete fool, I'm hoping to convince one of "our" subcontractors at work to collect and deliver it to me because it is sort-of on his way-ish..........
Posted by sfb at 14:44