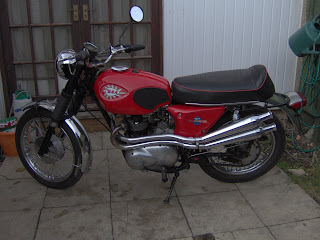 Myles rang today to say his bike was in bits and could we bring back the clutch puller he leant BH some time back. Slight panic ensued as a search of the conservatory began, neither of us having any idea where said item was. As it turned out, it was in a very sensible & safe place so we were able to return it to Myles. He is hoping to have the B40 back together to ride to Red Marley tomorrow but it is now 8.30pm and we have still not received the expected phone call announcing his success. Still, the night is young.......

We changed the gear box oil in the Tribsa today because the old stuff was horribly emulsified. I then dragged the bike into the back garden to see if it would start. After a few kicks to free the clutch (really needs attention soon, I think) I was giving a half-hearted kick, thinking I was still priming it but BH switched the ignition on and baby Tribsa roared into life without any effort at all and ticked over happily too. The new clutch lever, a multi-adjustable pretty thing from Trail & Trial UK (or is it Trial & Trail UK??) via ebay, has vastly improved the feel of the clutch. 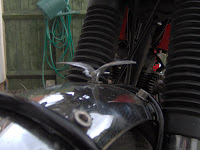 It was by now trying to snow so I pushed the Tribsa back inside to dab a bit of black paint on the new bracket BH made for the "new" from the autojumble £5 front mudguard and a bit of red paint on the damaged part of the tank. The front mudguard now also has the bird mascot I bought at Newark autojumble last January.
The forecast for tomorrow is sunshine but with a frosty start so we are looking forward to Red Marley hill climb but quite pleased we decided not to camp there tonight :-)
Posted by sfb at 13:31