Friday 3rd July was a wet and miserable day, as we loaded up my 1946 B31 on to the trailer.  I had hoped too have it ready (running and registered) before the show but various set-backs had made this impossible, hence the trailer.  We had also promised to transport a friend's Puch to the NACC stand.  Given the amount of rain that was falling, I didn't feel TOO upset at being stuck in the car!  The show was still in the very early stages of being set up when we arrived so we grabbed a couple of tables and padlocked the B31 to the tables (so no-one could pinch the tables) then helped with setting up the NACC stand.  As we were finishing off the NACC stand, more BSAOC members were arrived so it was time to help with the BSAOC stand.

Once the stand was looking respectable (not finished as more bikes were arriving in the morning) it was time to look for our camping spot.  Lots of driving round and round the site, then eventually we found our allotted space - between the Jawa owners and the Cossack owners.  By now, the sun was shining and putting the tents up wasn't as much of a chore as it might have been. A trip to the supermarket for vital supplies was necessary and then time for a stroll around the campsite, a drink and some very welcome bacon butties and burgers, thanks to the hard working chefs of the evening.

The next morning was time for an exploratory trip to the showers, these weren't too bad but the hot water ran out.  Still, it was nice to get clean after a night camping.  The sun was blazing, there was lots to see at the show and the BSAOC stand looked very impressive.  Although the show is organized by the VJMC, it is not limited to Japanese bikes and there was something to interest most people.  I did find the layout around the main building a little frustrating - you could only get out of the building at either end so there was no quick escape when you were half way through and wanted to dash outside and escape the crowds, but that is just a minor criticism.  My main gripe was the lack of choice in food - either expensive shit-burgers or expensive shit-burgers and not much else, a little disappointing given the decent variety of food you see at most shows these days. The burgers weren't a patch on the quality food provided and cooked by our own members.

There were some interesting stalls in the autojumble, with British parts available as well as Japanese parts, and I stocked up on a few necessities such as fuel filters, o-rings and fuel pipe (pink, would you believe it - hooray!).  The sun was so hot I managed to get painfully sunburnt and had to spend money at the hippy-stall on clothes to cover up with.  Later, another trip to the supermarket for after-sun and alcohol.  That evening, the BSA camp again provided plenty of food and good company for all its members and the intrepid chefs were smartly dressed for the occasion. 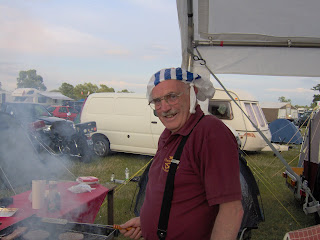 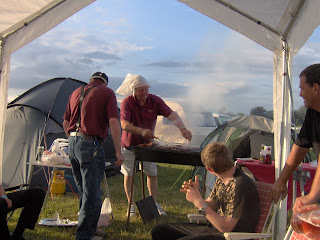 A quick look around the campsite, and we found a group of rather lovely looking BSAs as well as a variety of Cossacks, Jawas, Vincents, various Japanese bikes and some very interesting sidecar outfits. And the Gold Star Owners, of course. 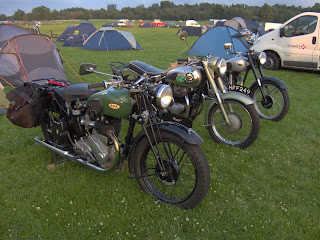 By now, it was starting to get dark so it was back to the BSA camp for good company and frivolity.  Colin P seemed to have acquired an impressive head of hair and various folk were singing and playing guitar, all of which was interspersed with the occasional downpour of rain.  Happily, we mostly avoided getting soaked because Cliff and Daphne (as well as working incredibly hard on the BSAOC stand all weekend) had cleverly provided a huge gazebo for shelter. 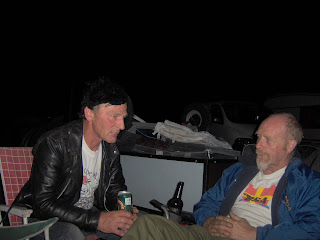 Fortunately for the other campers, we eventually ran out of songs and alcohol and turned in for the night.  The next morning was bright and sunny again, the showers stayed hot for longer and there was plenty to see at the show.  Outside, you could find F2 motorcycles were putting on an impressive display of Ural outfit riding, too many Armstrongs to count and innumerable Gold Stars on the Gold Star Owners Club stand.  Inside, were some unusual scooters, mopeds and a good variety of racing bikes, Japanese, British and otherwise.  Also, a very interesting BSA special...............although at over £600 initial asking price, I was able to resist buying it! (It was reduced to £450 last time I saw it) 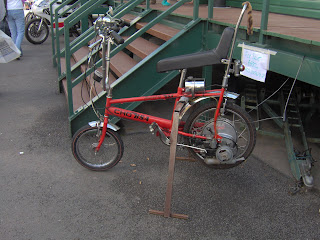 Eventually, it was time to clear everything away and set off home, hopefully with time for a bit of a rest to recover from a very enjoyable weekend.  It started to rain as we set off, so once again I didn't feel too bad about being stuck in the car. The VJMC certainly put on a very good show with an impressive variety of exhibits and this, together with the good company, made for a very entertaining weekend so a big Thank-you to everyone involved!
Posted by sfb at 11:58