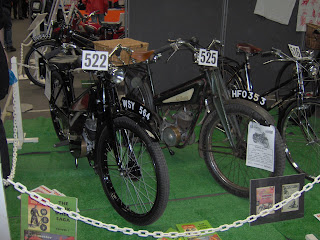 We were up bright and early at 6.00am which meant we were able to park near to the main hall and get to the BSAOC stand by 9.00am. No-one was there! We decided we should open up the stand, although we had no raffle tickets to sell and no regalia to sell either. This meant telling lots of people to come back later but we were also able to enjoy a natter with several of the visitors, including a very nice man from Holland who chatted about the BSA international rallies and admired a picture of my Angus the Tribsa. Eventually, survivors from the BSAOC camp started to trail in, looking a little the worse for wear. Colin turned up looking in a very sorry state. His wife, Linda, had driven him there. She had offered to bring everything to the show for him, leaving him in bed, but he had bravely struggled in bringing raffle tickets etc with him. After leaving all the bits and pieces he needed to leave and explaining that it was Linda's fault he was so ill as she had not collected him from the pub early enough, he allowed Linda to take him home so that he could have a lie down, poor thing!

I sold lots of raffle tickets, enjoying chatting to various people & promising them all that of course they had just bought the winning ticket. Tony and I did our best to help someone identify his newly acquired BSA - we did have some success but had to suggest he come back later to talk to expert Steve Foden. By now, there were far more capable people than Jon and I there to run the stand so we went for a wander, popping back from time to time to see if anyone wanted to have a break. The weather today was wetter than yesterday and it seemed to be a lot less busy - which made wandering around a lot more pleasant! Late in the morning, or possibly even in the afternoon, a frail Myles rang Jon to ask if we would drop some bits and pieces off at his house on the way home as he was far too ill to come to the show. Other BSA Owners informed us that he had been up all night, only going to his tent for a sleep at 8.00am Sunday morning. They're a rowdy lot, these BSA Owners...... 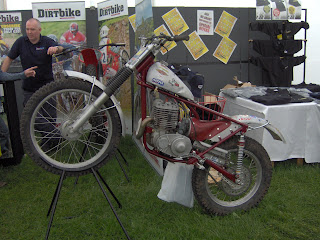 There were lots of nice bikes to see and, with fewer people around, it was easier to take photos. I was on the look out for a Tiger Cub engine but without success. We found the Dirt Bike marquee but there didn't appear to be a dirt bike demo this year, much to our disappointment.

Late in the afternoon, I went off for a wander on my own and found a bargain jacket on the Triumph clothing stand - a jacket reduced from £100 to £15. As I was paying, it started chucking it down with rain which, apart from being incredibly loud, started leaking into the main hall through the skylight directly above the Triumph clothing stall. As the staff were panicking about the rain falling on to the till and clothing - one enterprising lad put a pint glass underneath the leak, which wasn't very effective as the rain was coming in on all sides of the roof panel which must have been at least a metre long - I was able to offer them some consolation by pointing out that it only seemed to be leaking above their stand and everyone else was ok. I judged it was now a good time to make myself scarce and I pottered around the rest of the hall, watched Jim Reynolds presenting a few trophies, then headed back to the BSAOC stand. This was already being rapidly disassembled so we tried to help a bit, lifting up carpet tiles etc. Colin was back by now, looking surprisingly happy and well. I tried telling him that the C15 had been stolen but he wasn't falling for that trick so Jon and I went to fetch it from the van. I rode it across the car park to the doors to the main hall and waited on it while BH went to ask Colin what he wanted to do with it. Jon was gone quite a while and lots of people commented on what a nice bike it was; one nice man even remarked that I looked really good on it. Andy came to admire it and we argued over which of us should get to keep it......then Jon bought us back to reality by coming out to tell me to push it into the hall for now and give it back to Colin. BH then rode it to Colin's van while the rest of us carried on clearing up the stand. We loaded the New Hudson and my BSA bicycle back on to the van, after stopping to let someone take a picture of the bicycle, then set off for home. We dropped off Myles' belongings on the way back - but no sign of Myles, he was still in bed and dead to the world! We were very tired but happy after a hectic and enjoyable weekend - time to start looking forward to the next Stafford Show! 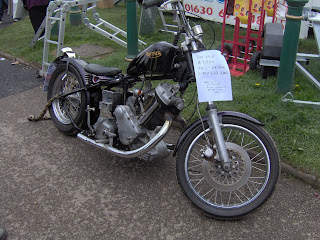