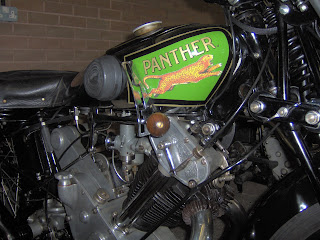 On Friday, I had the day off work and had borrowed the work van for the weekend because Jons New Hudson and my BSA bicycle were being exhibited in the Stafford Show. When we arrived there were only two other people on the BSAOC stand with their bikes and there was nothing we could do as none of the display equipment had arrived yet. We spent most of the afternoon chatting and looking around at the other stands being set up. John from the NACC turned up with his New Hudson which he left with us while he had a look around. When he came back we sat and watched all the bikes being pushed or ridden into the main hall and we felt like kids in a sweet shop - there was virtually nothing that we wouldn't have loved to own! 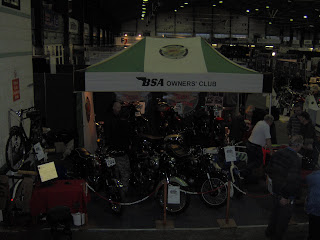 Eventually, Colin, Arthur and Idris turned up with their vans full of the components of the BSAOC stand and suddenly there was lots to do - laying carpet tiles, erecting the gazebo, setting up the lighting and computer, laying out tables ready for selling raffle tickets and BSA regalia and so on and so on........I was pleased with myself when someone came asking for advice about paint colours and I was able to help him by pointing him in the direction of BSA paint expert Polly Palmer. By the time the main components of the stand were in place it became clear there were too many of us working in a small space so Jon and I took ourselves off to the NACC stand to see if we could help there. There was little to be done but I rolled out some artificial grass matting, wrote out some machine details and attached numbers to Jon and John's New Hudsons. John gave us a boxful of Raleigh Runabout engine and carburetor bits for spares, with the rolling chassis to follow tomorrow. We then returned to the BSAOC stand to find all the bikes now in place but my poor bicycle had been forgotten and left out so we found it a small corner of the stand and cable-tied it to some railings next to the computer.

Colin had bought his BSA C15 trials bike, in the hope that the guys doing the dirt bike demo would ride it and give him their opinion on it. Because he would not have use of his van on Saturday we had arranged that we would take it home on Friday and then bring it back to the show on Saturday. Before we loaded it into our van, Colin insisted I try it out. He started it up for me and I set off cautiously accross the car park. Although it hurt my dodgy toe joint to change gear, by the time I was in 3rd gear I had fallen in love with the bike - lovely and light and sounded gorgeous too. Then it was Jon's turn and he was more adventurous, riding it up and down the steep bank to one side of the car park. He too had clearly fallen for this pretty bike and reluctantly loaded it into the van. We then set off to the Railway Inn where some of the BSAOC were camping. The pub had laid on a barbecue with delicious cheeseburgers or hotdogs so we stopped for a couple of drinks and a chat before setting off home. The main topic of conversation while we drove back was Colin's C15 - Jon was feeling inspired to get his B40 sorted in a similar style while I was making plans for the spare Bantam rolling chassis that has been languishing in the shed for a couple of years. When we reached home we carried on discussing these plans over a few glasses of wine - a very pleasant end to a very enjoyable day!