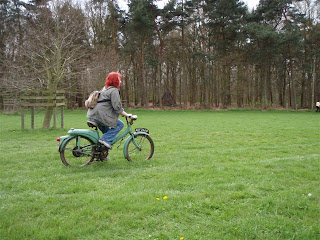 We didn't get up as early in the morning as we had intended so ended up stuck in a queue of traffic for quite some time. Fortunately, we knew of a detour around the lanes that skipped a lot of the queue, emerging just down the road from the Showground. We parked the van in the car parking field, quite a long way from the main hall and set off for the BSAOC stand. Things were a lot busier today than on Friday and, as there were so many people already manning the stand, we went for a wander in the direction of the NACC stand. Liz filled up the kettle and we enjoyed a welcome cuppa. BH arranged to meet John at 1.00 and I had already arranged to meet Jen from the Morini Owners Club at 1.00 and we hoped to co-ordinate our trip to the vans - firstly, to collect the Raleigh Runabout rolling chassis from John and secondly to offload a Morini frame on Jen. When I met with Jen she asked if we could bring the frame to the Morini stand, which was upstairs so I went with BH & John to get the Runabout. We unloaded it from John's van and I set off accross the field using only pedal power - this tickled John immensely and out came his new camera. Jon also filmed the event on my digi-camcorder.

We loaded up the Runabout then decided there was time for a little play on Colin's C15 again (he had told us we should have a ride again!). Jon rode it around the field and then I did the same. When I got back, Jon came over all adventurous and went for a little ride in the nearby woods, then realised that this was an area the happy campers from the far end of the field had been using for a toilet, so he came back and we loaded the bike back into the van. By now it was 1.30 and we had to get the Morini frame to Jen before meeting people from the Classic Bike Forum at 2.00. We had underestimated how heavy the frame was and were getting unpleasantly hot and sweaty. Of course, most people we passed had a funny comment to make. We struggled up the stairs and through the bar area and deposited the frame at Jen's feet then collapsed in a heap. When she took a tenner out of her pocket, Jon grabbed it and headed for the bar. He returned with a cool refreshing pint of cider for me and a lager for himself and gave Jen the change. Several Morini owners gathered around the frame, discussing ideas for its future. I realised it was nearly two o'clock and we rushed to the Real Classic stand to meet some new people. Cliff and his wife Sue, from the Classic Bike forum were there, as was young Jamie - a 15 year old who has nicely restored an Ariel Colt and now has several other projects underway. His Dad was with him too. We all headed out into the sunshine for a chat in the sunshine and to take a small group photograph of me, Cliff and Jamie. Velton hadn't turned up but we weren't too surprised as there had been a question mark over whether he would get to the show at all. 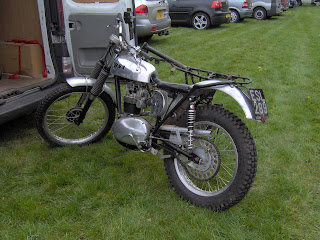 Later on, after heading back to the BSAOC stand, the chap who had offered me a bicycle came back. He had the bicycle outside the door to the main hall so I went for a look. It was very original with hub dynamo for the lights and hub gears and I readily agreed to pay him £25 for it. Soon after this, Jon reappeared from wherever he had disappeared to, wasn't too surprised to see me with yet another bicycle and we headed for the NACC stand to show off my new acquisition. On the way, I saw a bloke who had commented on the the Morini frame earlier - he now remarked that I had come a long way with my project very quickly! I cycled down to the van and loaded the bicycle then went back to meet up with Jon again. Lots more wandering around the show, taking pictures and looking for bargains. We met Velton from the Classic Bike forum, who had left a message for me with Myles on the BSAOC stand - I was pleased he had made the effort and it was nice to put a face to the name. We also said hello to Andrew Wilson, from CBG, and his wife Elaine - this was nice as I was able to personally thank him for kindly sending me some of his photos for use in the newsletter I edit for the North Staffs BSAOC.

Soon, it was time to close down the stand. Again, we headed for the Railway Inn to meet up with the campers from the BSAOC. The pub were serving a choice of chicken curry or stew so we both enjoyed some stew and a chat with everyone. Derek was happily telling me how much he loved everyone so I surmised he was somewhat inebriated. As we drove home, we couldn't help but speculate on what sort of state everyone would be in in the morning.