Well, we've not had huge amounts of snow but we have had enough to make driving interesting.  Most of the snowfall was over Friday night and Saturday.  We drove as far as Tesco, the worst moments being people stopping for no apparent reason and the idiots who insist on tailgating.  The road into Ironbridge was closed but we didn't need to go there so weren't too worried.

No more snow fell during the night but it was cold enough that my car was frozen on the inside and there were great clods of frozen snow hanging behind the back wheels.  We'd thought it might be fun to venture out on the two XL185s so we dragged them out of the Green Shed.  Well, to be honest, Gus dragged them out of the Green Shed while I struggled to open the three padlocks on the back gate, two of which refused to co-operate until I'd poured boiling water on them.

Herbert (No 1 XL) started fairly easily but Horatio (No 2 XL) took a little more persuasion but only because he needed me to hold the choke on while Gus kicked him into life.  Gus took Horatio on a recce just beyond the end of the road to check out just how good an idea it was to take the bikes out.  The considered opinion was "Sod that for a game of soldiers".  Having seen the front and back wheel sliding around I think I would have been somewhat ruder than that and using the Bad "F" word........We put the bikes away and headed off in the car for a very delicious Sunday Lunch at the Robin Hood in Ironbridge. 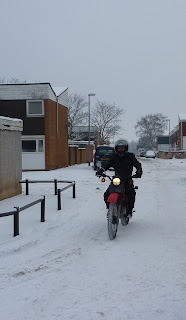 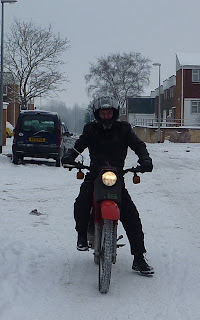 Oh, I'll try to post some Ariel 3 engine piccies over the Christmas break for those who are interested!!!
Posted by sfb at 14:27