We've often discussed the need to reduce our collection of two-wheeled vehicles as we have run out of space in which to work on any of them.  As a result it often seems that the shed contents are more of a scrapheap or motorcycle graveyard than a cherished collection.

I can now happily report than Jon has had some success in this regard, having sold the New Hudson autocycle and the BSA B2 (sob....I wanted that!) at the Stafford Show last weekend.  The New Hudson has gone to Southern Ireland and the BSA has gone to sunny Spain.  He has also agreed the sale of the trusty Enfield Bullet to a friend.  The proceeds have been used to buy a 1999 Triumph Speed Triple, citrussy-green bug-eyed beastie that manages to look both slightly deranged and rather gorgeous all at once.  Well done, Jon - three out and one in!

What success have I had?  Well, I've decided to sell the Morini Kanguro.  I've decided to sell it a couple of times and then changed my mind because it really is a fun bike and, having been wired so it doesn't need a battery, it always starts easily even if it has been left for months.  Anyway, this time I really have decided to sell it.........although I don't plan to advertise it at all.  I've decided that if/when I hear that someone wants a Kanguro then I will let them buy it.  If I like them.  If I feel like it.  In the meantime, it is spending some time in my new storage unit - leaving a bit of shed space here.  So, well done me for being so decisive.  On the strength of that, I bought myself a little 1981 Honda XL185 which I'll be taking to Spain in September for some trail riding - I had to buy it as the trail riding is for twin-shock only so I couldn't have taken either the Morini or the Serow.  And it was a bargain.

Earlier this week, I heard that a friend is interested in buying the Yamaha Radian and I'm more than happy for that to go.  On the strength of that and because I have nothing that will go quick enough to not really annoy Jon if he is on the Speed Triple, I've now bought a Honda XBR500.  Again, a bargain.  It's got the nice spoked wheels (not the earlier com-stars) and a Predator exhaust system - sounds fantastic!  I just need to do some tweaking before I can MOT it (fork seals, steering head bearings) and move the footpegs back to the standard position.  The friend I've bought the XBR from will eventually have the NSU Quickly on long term loan so that will leave more room in the sheds - in the meantime, it will be moved to the storage unit.

So, to summarise, Jon has sold three and bought one and I have moved two, nearly sold one and bought two.  I don't think I'm doing very well really.  It's just as well I have the storage unit so I can just move things out of the way and pretend I've reduced the collection :-)

Pictures of the new toys below - I think you'll know which is which! I'm off to clean the XBR and move the foot-pegs. 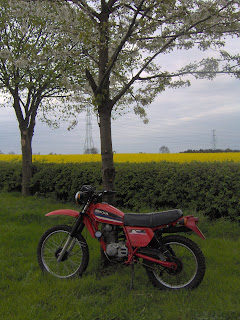 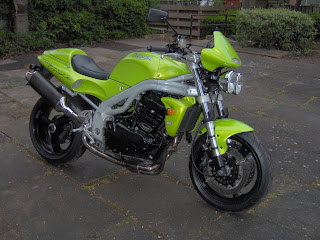 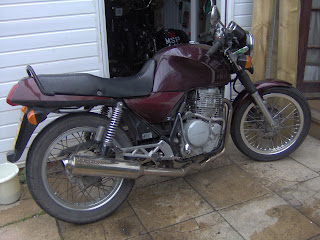