While at Uttoxeter, I acquired a Batavus HS50 moped, having somehow justified the purchase on the basis that the Batavus was running and had the same Laura Anker engine as the Ariel 3s.
Now, Bertie Batavus has missing engine covers and he's having to live out in the rain at the moment so I thought I'd borrow covers from one of the Ariel 3s.  The Ariel 3 engine I bought on ebay came without covers so that was no help.  Next possibility was the snot green Ariel 3 that apparently used to live in a hedge.

It looks fairly clean inside the chain case, quite unlike everything else.  Engine bolt is accessed just behind the top run of the chain but there is enough slack to not have to remove the chain: 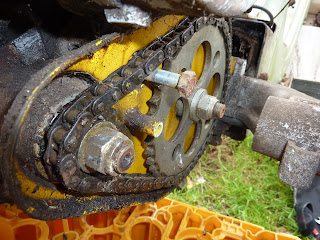 With the two engine bolts removed, the engine lifted out easily, leaving the layshaft, drive chain and inner chain cover in place.  They drop down without the engine bolts to hold them in place: 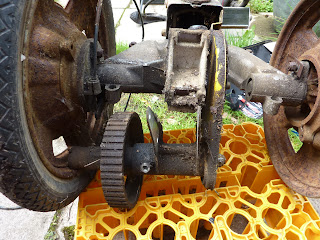 Engine bolts were replaced to keep the chain case and layshaft in position.  The tall nut on the left hand side is apparently the belt drive adjuster but I haven't really worked out yet how it works - not helped by the distinct lack of belt, I suppose. 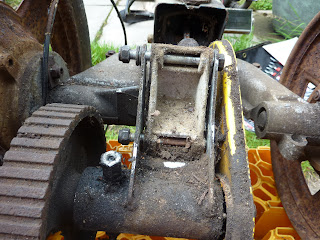 The flywheel cover fits directly on to the Batavus engine.  There are supposed to be some sort of spring clips to hold them on but those were missing, of course.  That probably explains why the covers are missing on a lot of the other Batavus images I've found on 'tinternet. I'd been hoping there would be a cover for the clutch as well but I'd forgotten that the Ariel 3 has a fan fitted on that side that means there is nowhere for a clutch cover.  However, the flywheel cover also fits where the clutch cover should be so I need to check if there is one in with the original blue Ariel 3 so it can be loaned to Bertie and help keep him protected from the rain.

The idea is to get the Batavus all sorted and running properly and reliably (and road legal so I can use it on NACC runs), then use the running engine as a reference for when I try and put an Ariel 3 together.
Posted by sfb at 11:24