Yesterday, I put the cleaned carb back together and then re-fitted it to Bertie.  The fuel tap had been soaking in petrol so I refitted that as well, filled the petrol tank with a 50:1 ish mix of petrol and two stroke oil, then refitted the petrol tank.  A bit of pedalling later and he was running.  He stays running for longer than he did before but still isn't quite right.  To be fair, the exhaust system is missing so I just cobbled on a knackered Ariel 3 one.  I can't take him for a test ride because the Ariel 3 downpipe stops the front wheel from turning and the tyres (which look as if they are the original ones) almost certainly won't hold any air!  I'm going to be funding his "restoration" entirely from funds raised by selling stuff on ebay so my next step is to raise enough money to buy some nice new tyres and tubes.

It seems to be a good way of shifting rust from an Ariel 3 exhaust! 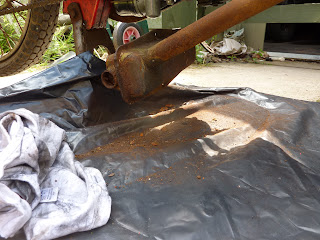