...to any of the bikes since about September.

I bought a very pretty 21" front wheel for the B40/B25SS project (from a Triumph Adventurer, I believe).

I've had a wonderful looking electronic ignition made for the Tribsa by Kirby Robotham but I need to convert the bike to 12v before I fit it and I am lacking the space and confidence to attempt it at the moment.  I'd wanted to have this done for a while so when I got my insurance payout from a car accident last year, it seemed like a good way to spend the money.  DAM on the Classic Bike Forum spoke highly of Kirby's ignition in his father's 3ta engined Greeves so this finally swung my decision to splash out almost £300. I think it will be worth it.

Last week, I thought I had managed to find a new owner for the NSU Quickly but, after lots of shifting bikes in the shed so that the NSU was accessible and ready to deliver, this all fell through.  It has to go so the hunt for a new home is back on.  I need SPACE!!  One friend would like it but it would be dependent upon being able to sneak it into his shed without his wife noticing the appearance of an extra bike. 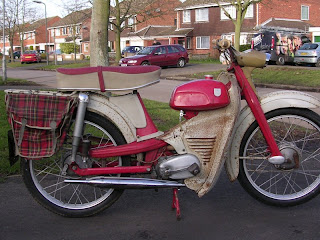 The space problem may be eased soon as I am hoping too be able to rent a storage unit near work, which should take all the junk from the spare room plus the trailer.  This means two things - one, I can try and sort out the garden so I can start growing vegetables, herbs etc and two (prior to decorating) I am planning to move the BSA B25SS chassis into the spare room so I can clean it up and paint it etc.  I think the Ariel 3 will probably find its way up there for painting as well.  I ran this idea past Jon while we were at the NACC meeting last week and he didn't seem at all surprised.  The practicalities of testing out the B25 brakes by riding down the stairs were discussed but, should the brakes prove to be crap, I would end up riding through the back door and into the bike-conservatory and probably impaling myself on some handlebars or something equally painful.  The plan was therefore revised to a more cautious one, which involves disassembling the rolling chassis to transport it down the stairs.  And then there is the engine to attend to, which is still in bits in the kitchen. 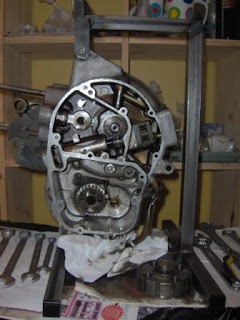 While the B40/B25SS and the Ariel are residing in comparative luxury upstairs, there should be room in the shed to take apart the B31 forks which I reassembled way back in August using lots of nice new parts, then, after re-fitting them to the B31 realised I had missed out the circlips.  There is also the rather tricky problem of chain alignment to be solved. And lots of other bits too.  I need to write a list.

The alloy tank for the Tribsa has made progress.  I bought it for £15 on ebay but it had a huge dent in it.  It looked the business on the bike though.  A friend in the BSAOC has had it for....er...probably about a year now.....he's doing a cracking job on it though.  Before Christmas, he had taken the bottom off it in order to straighten out the dents and you couldn't tell there had ever been any dents.  He is currently making a new bottom for it with a narrower tunnel to fit more closely around the top tube which will make the fuel capacity greater too. He's also repositioning the fuel taps.  He reckons I can have it back in another year.  I think it will be worth waiting for. 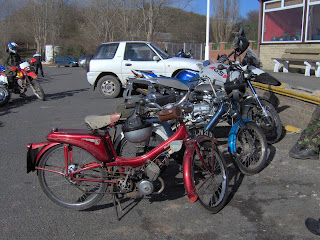 Then there's the Raleigh Runabout to be sorted because it makes me laugh.