You can't believe everything you read

There was a small amount of snowfall during the night so I fancied going for a walk in the snow.   This afternoon we headed for Lilleshall monument.  There was no snow there but we briefly saw the snow on the distant Welsh hills before they were hidden by clouds heading our way. 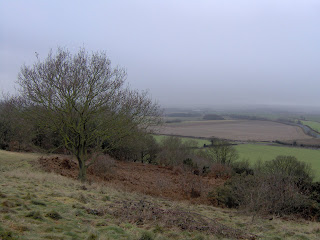 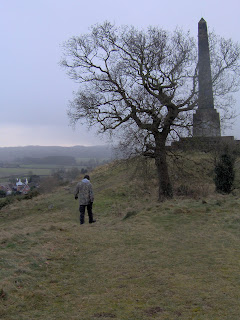 Lilleshall monument was erected in memory of the first Duke of Sutherland in 1839, a few years after his death in 1833.  On it is the inscription "To the memory of George Granville Leveson Gower, K.G. 1st Duke of Sutherland.  The most just and generous of landlords.  This monument is erected by the occupiers of his Grace's Shropshire farms as a public testimony that he went down to his grave with the blessings of his tenants on his head and left behind him upon his estates the best inheritance which a gentleman of England can bequeath to his son; men ready to stand by his house, heart and hand" 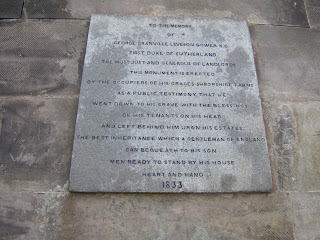 Well, call me cynical but I couldn't help but wonder if the monument had been erected by his grateful tenants or by his son so when we got home I had to do a little browsing on the good old internet.  I didn't find the answer to my question but on the excellent Geograph website I found a few pictures of the monument and noticed a comment someone had added later.  This read "The Scottish tenants of the Duke of Sutherland would not have shared the sentiments given on this monument.  As a major landowner he is seen as responsible for widespread Highland Clearances replacing tenants with sheep farming.  His statue at Golspie causes continuing controversy".

This statue at Golspie was also ostensibly erected by "his mourning and grateful tenantry" to a "judicious, kind and liberal landlord" and stands near the summit of Beinn a' Bhragaidh.  Many people would like to see this monument removed.

At the start of the 1800s the Sutherland Estates amounted to some 1.5 million acres and formed the biggest private estate in Europe.   Because more money could be made from the land if it was grazed by sheep than from the rents of the crofters, up to 15,000 people were forcibly, sometimes brutally, removed.  Some were resettled in coastal communities but more were shipped to North America.

More about the Highland Clearances here.

This still leaves the question "Were the Shropshire farmers really grateful?" I shall continue to look. 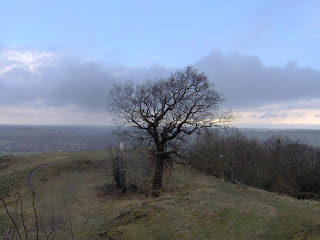 Now, I mentioned above the Geograph website.  To quote from the website "The Geograph British Isles project aims to collect geographically representative photographs and information for every square kilometre of Great Britain and Ireland and you can be part of it"

I've not seen this website before today but it looks very interesting - even if you do not want to add your own photgraphs it provides a useful reference as there are photographs from almost everywhere.  Go on, have a look! (Edited 21.44 31 Jan 2010 - have spent some time browsing the Geograph site and have noticed that some of the contributers seem to use it to post opinions about off-road motorcyclists, 4wd vehicles and even horse-riders ruining routes for cyclists and walkers.  Personally, I think that is abusing what the site is about.  I'd rather just see the photos with a factual statement of where and when the picture was taken.  There are plenty of other places to go and argue the toss about who should be allowed where.)