I'm SO tired, only had about an hours sleep since 8.00 yesterday morning. We managed to get on an earlier ferry, 2.20 instead of 8.30. There are Very Strange People catching ferries at that time of night (ourselves not included, obviously) including several scuzzy white transit van loads of men who we suspect of being Extreme Paintballers heading for some sort of Convention dressed in various camoflague gear. Of course, we could have been delirious through lack of sleep and merely suspecting innocent people of obscure activities, but by the time we were driving on the ferry we half expected to find ourselves on the film set of Dusk 'til Dawn with all the other passengers (and crew) wanting to eat us.
We survived, probably due to looking somewhat unappetising after travelling for hours............and arrived at the BSAOC rally at about midday. Very nice site, we had booked a caravan. It's not "retro" it has really been like this since the 70s or possibly 80s but it is comfortable and, now the nice Dutch caretaker has provided gas and fixed the gas boiler, we can do things like cooking and showering. Jon seems to have fallen asleep on the way to the shower though!
There are lots of interesting runs planned for the week so the Tribsa has died. Jon has sworn at it a lot but it still thinks it should play dead. The battery is completely flat for some reason so I'm going to buy a new one from Polly Palmer tomorrow and see what happens. Luckily, I also brought along a folding BSA bicycle that Jon's mum found in a junk shop for £8 so I have been cycling around the campsite. The brakes are superior to the Tribsa ones. Just as well, as it is also faster at the moment!
The sun is shining and there is a bar in the marquee called "The Falcon Bantam's Nest" with live music most evenings this week, including a group called "The Bantams" on Friday . Should be a good week, just hope I can get the sodding Tribsa sorted.

After a wander around the site, looking at lots of interesting BSAs (and a few others) and having polishing lessons from Derek, we headed for the bar.  There was a ticket system for the bar, which always works well and saves queuing time. Still suffering from lack of sleep, the alcohol kicked in quickly and this, combined with a BRILLIANT blues band, the Blues Doctors, meant lots of people up and dancing and having a stonking good time.  The band were just what was needed to get weary travellers feeling lively again, a cracking choice by the organisers, the Dutch BSAOC.  This looks set to be a very good week. 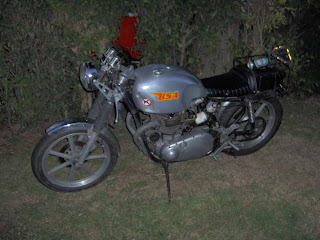 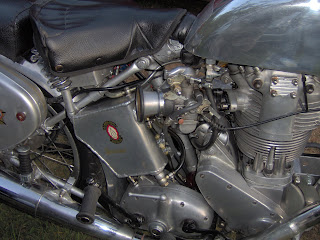 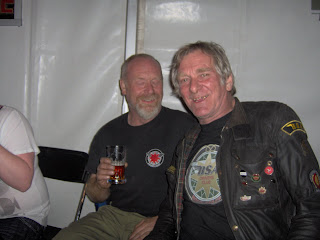 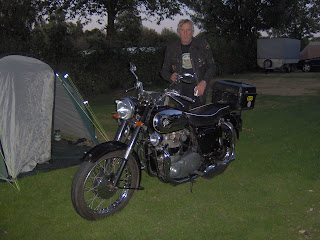 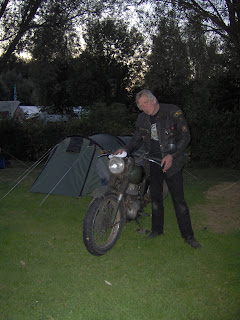 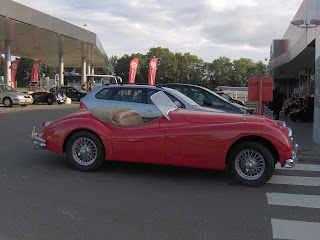 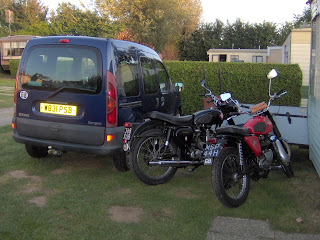 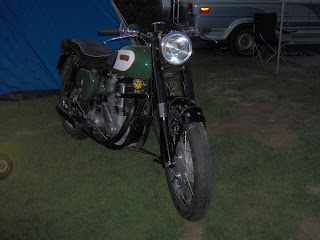