In the morning was Silly Games (sorry no piccies) and a decent autojumble.  This was the only day that the weather wasn't warm and sunny but was damp, grey and drizzly so Myles, Jess, Derek, Bernie, Jon and I decided to go for a short ride to Valkenburg.  We enjoyed a very nice lunch (Goulash soup with pork balls for most of us) then a stroll around the shops, where we spotted a very nice German Triumph and a beautiful Moto Morini Corsarino (that I would have liked to take home).  For a bit of culture, we decided to take a look at the castle ruins and were all surprised by the amount of grafitti carved into the castle walls, the dates ranging from 1855 to the current year.  Derek remarked that the only person who hadn't vandalised the castle seemed to be Kilroy.  Later on, we found the words "Kilroy was here".............We speculated as to how people had managed to carve some of the grafitti in such inaccessible places and concluded that it was done by a highly trained monkey on a stick.  This opened up all sorts of ideas for possible uses for a Monkey on a Stick - any more suggestions will be gratefully received. 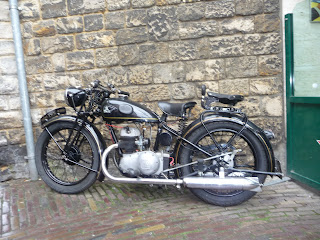 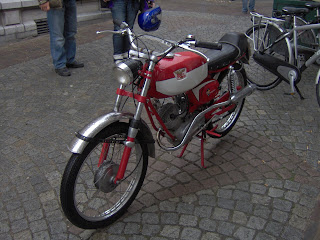 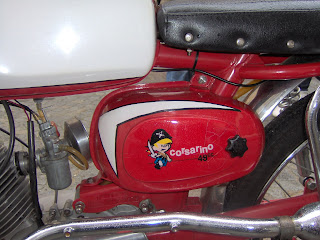 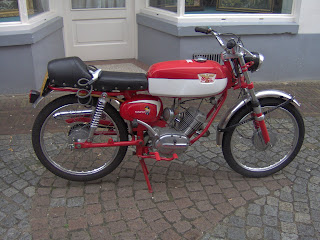 Myles had taken quite a shine to a statue of a naked young lady gazing at the river from a bridge so we had to take a look.  She was protected by a gate and barbed wire so I assume she had previously been subjected to improper attention.  There are several interesting sculptures in public areas of Valkenburg and most of the private gardens and yards are tended with such attention to detail that there seems to be a general acceptance that tourists will be nosing at them.  Some of them almost seemed like a stage-set.  You couldn't imagine the householder appearing on their balcony in slippers, they would have to spend at least half an hour dressing and primping before venturing out into the open air. Still, it is a very picturesque and fascinating town and well worth at least one visit. 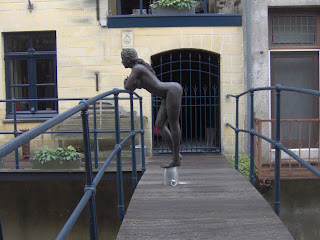