Stephen has emailed me these piccies of his gorgeous BSAs, together with a short write up:

Hi Hazel.
Thought you might like to see my 1950 D1 factory Competition model. It was one of the first of the plungers and retains quite a lot of the original finish where it hasn't been blown over with some lighter green at some point in its life. The tank has a slightly adapted cream panel, which was again done by a previous owner, nicely this time with the correct mist green, but the bike is physically bog standard. It sports (ha) roller bearing front hub, decompressor head, skeleton guards, 2ins seat riser frame, skeleton chainguard, gear indicator, adjustable footrests and an upswept exhaust. The gearing is standard. The rear light is the hens tooth spun alloy Wipac which I sourced from Canada and the incorrect front half coconut headlamp the bike is wearing in the pic is soon to be replaced with my recent aquisition, an early spun alloy shell and rim headlamp with correct Wipac bowden cable operated dip system. I do have his original log book as the last owner sold his number. I am usually against this, but as I know his history (Thetford) and like his recent number so I'm a happy chap. Thats Taz (Tas) that is.

Sarge is my 1939-45 war horse WM20. He looks disgusting/splendid, but having been through the mill of war and only allowed demob in 1968 what can one expect. The front frame is actually 1944 but the rear frame is early 39 and the engine has no real number except for 499 stamped on it. Standard practice to mix and match/upgrade parts off the shelf with little or no consideration for originality. Some parts like the carb and rear stand are early too. He wears battle scars and shows drab green beneath the sand paint (date unknown possibly 60's even). I rebuilt the gearbox which had sand plugging every screwhole and the bushes were so badly worn, that the bike would change from 1st to 4th (think it was) with one prod plus some crunching. The box had sand inside too and under load the whole shaft was lifting. Sarge runs like a top now on +60 though he balked a bit when I offered him an Italian piston and even though he is filthy due to the oil covered paint, it is how he will stay with me until its time to pass it on to the next Custodian. I think he is a real character and he takes great pleasure in kicking me in the leg when possible, as nothing is rounded or soft about him. I remind him, whilst rubbing the bruise, that I too wore 3 stripes once, but he mutters somthing about desert and flies and younger people today as he turns over in his charpoy. Hope the pictures are of interest. My apology for any spelling errors but the brain fog you possibly remember with ME/CFS doesn't help with creativity. The bikes don't get out these days so it would be nice for them to be noted as existing. I have other machines too you see. They keep me going.
Regards. Steve 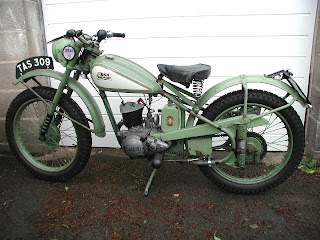 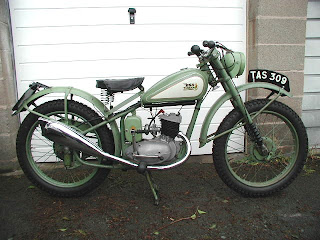 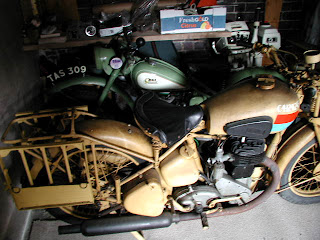 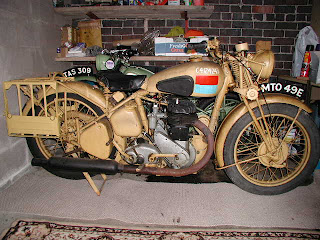 That WM20 IS splendid, heaps of character! And Taz is lovely too.  Thanks for sharing those pictures with us, Steve.
Posted by sfb at 07:01