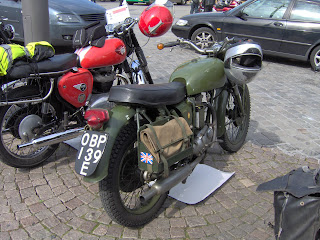 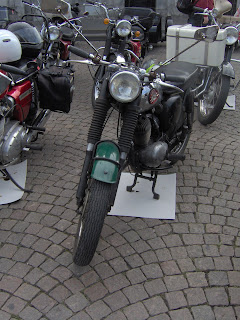 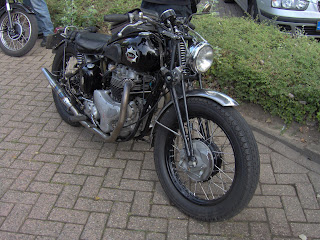 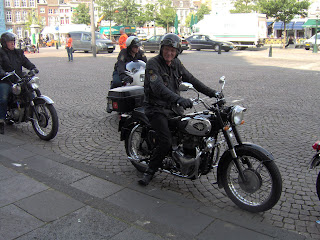 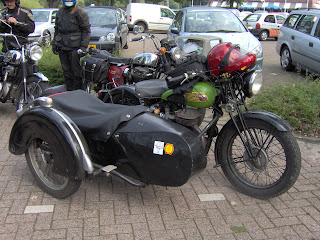 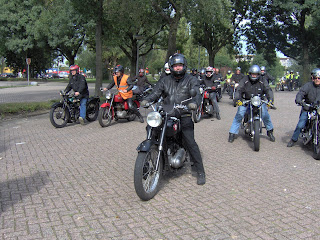 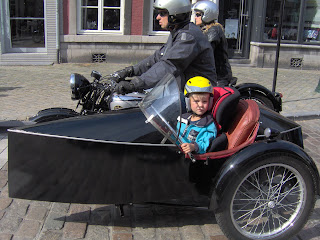 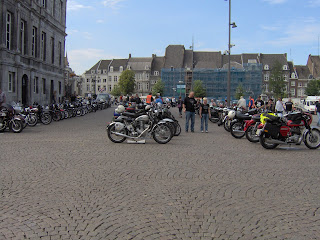 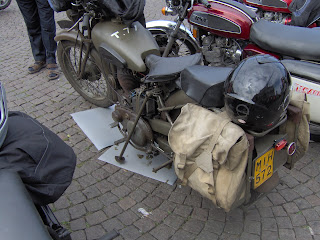 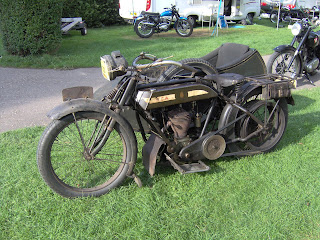 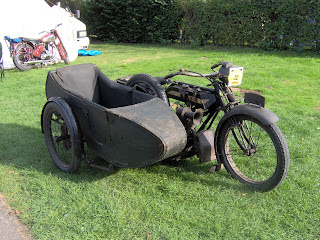 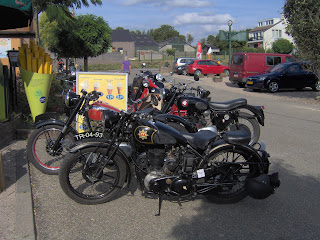 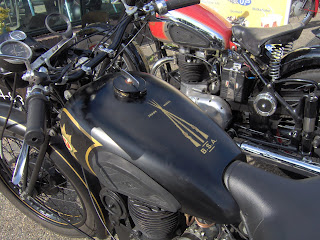 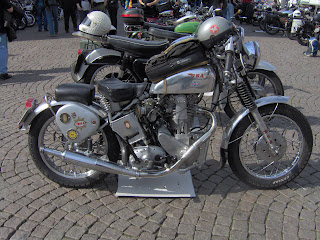 Following the activities of Saturday night (drinking and dancing - even I was dancing!) Jon and I failed to get out of bed in time for the Official Opening Ceremony but I am told it was very good.  We didn't make the Rally Puzzle Tour Run which was following directions given in photo form although we do have the directions so might try it out later in the week.  Instead, I went to buy a battery from Polly Palmer.  I also bought a battery charger and borrowed Polly's crimpers.  The battery was filled and left charging and later on fitted to the Tribsa - which now started and seemed to run ok.  We set off for a ride and it turned out not to be running ok after all so we only went about a mile down the road then came back.  We decided not to do anything with it and went for a meal at the camp site cafe, while discussing what to do with the sodding bike.  The meal was very pleasant and by now, "Gordon and Erik" were playing in the bar so we headed there for the evening and plans were hatched for sorting out the Tribsa after the Line-up on Monday.

Today, Monday, was the Line Up in Maastricht.  We all set off from the site at 11.30am and were directed on a very nice route through Valkenburg and surrounding countryside.  I was riding pillion on the B31 and used the opportunity to film bits of the run and enjoy the sound of all the different BSA engines, singles, twins and triples and a couple of ring-a-ding-dinging little Bantams.  There was a huge variety of BSAs and it was an impressive sight to see them all at once.  We arrived at the cobbled streets to the Markt in Maastricht and were handed incontinence mats for the leaky Beezas as we parked them around the town hall.  Later on, I swapped Jon's mat with the one from Derek's A7.  Jon had overfilled the B31 gearbox so it was making a small puddle whereas Derek's barely leaks at all.  He was quite distraught to find a messy pool underneath his shiny clean pride and joy but it was a fitting revenge for some of his derogatory remarks about the Tribsa.  Jon told on me so Derek didn't have to worry for long but I am sure that payback time will come!  I have to report that there were several BSAs that appeared to be completely oil tight.  I think the remark that they must actually be empty was probably made by someone a little envious.  Maastricht is a very pretty town and we had a wander around the shops and bought some souvenirs before heading back to the bikes and setting off back to the campsite.  It looks as if it would be worth spending more time there but it was a hot day and walking around carrying bike helmets and jackets wasn't the most appealing prospect.

Once back at the caravan, Derek and Myles came to visit and Sort Out the Tribsa. In short, it seems I may have the wrong carb but the needle jet has been re-set and the bike now has possession of Derek's spark plugs and all seems to be improved - a proper test ride will take place tomorrow so things are looking up!  Soon after all this, some very nice Dutch men came and admired the Tribsa and we had a good chat about specials.  One of them has an ABSAF engined Goldie so I shall have to take a look at that tomorrow, too dark to take decent piccies right now.
Posted by sfb at 08:20