Today Derek, Bernie, Jon and I went on a ride that took us through three countries - Holland, Belgian and Germany.  The scenery was lovely and the sun was shining (temperature was up to 34 degrees this afternoon) and I was feeling very pleased to have the Tribsa running at last.( BIG THANKS TO MYLES FOR HELPING TO SORT IT OUT SORTING IT OUT FOR ME AND TO DEREK FOR PROVIDING THE SPARK PLUGS!!!!)  Top speed seems to be about 60-65 but it was nice to have it back to first-kick starting and ticking over properly too.  We took a scenic route and ended up in Monschau in Germany.  We've seen Monschau before, from a higher road that looks down over the town, and said we must go back and have a proper look.  It looks like a town from a Grimms fairytale, cobbled streets and ancient buildings.  I imagine that September is a better time to be there than in July or August when it is peak holiday season - it wasn't too crowded and we enjoyed a pleasant walk through the town.  American BSAOC member Keith seemed very taken with Monschau and the timber framed buildings.  There was a sculpture park which, although we didn't go in, looked very interesting - we could see a bear and some goats and some HUGE spiders on the wall (I hope they were sculptures anyway).  We had a very tasty and reasonably priced lunch served by a very eager to please, friendly young man then looked around some of the shops before heading back to the bikes.  I had piled some dead leaves under the Tribsa in an attempt to avoid soiling the streets of Monschau but the oil had overcome the leaves and managed to make a bit of a mess anyway.  Sorry Monschau!  A small child was pointing down at the bikes and saying "moped...moped".  I thought this probably warranted a Good Telling Off for the misguided child but couldn't be bothered, it was too hot.  We took a slightly different route back, equally scenic, but which took us through what must be the roughest bit of road in Belgium.  Although it was mostly straight and should have lent itself to opening up the throttle for a good blast, it was so bumpy that if you tried to go fast you were bounced around so much you couldn't see straight. I think the Tribsa was running low on fuel at this point too because it felt a bit rough-running anyway (when we stopped soon after to fill up, I got about £12 worth in the tank -  I've never put anything like that amount in before).  When we got back to the site there were lots of North Staffs members sat outside the bar (Surprise surprise!) so   we stopped for a refreshing cold drink before heading back to the caravan.  Arthur had apparently insisted on stopping at every bar on the way back from the train station.  As it was more than a few minutes walk from the campsite bar to his caravan it seemed rude not to invite him to call in for a beer!  After a pleasant time sat in the sun drinking and chatting, we went to collect our directions for tomorrows organised three countries run and to watch the participants setting off on the Lucas Night Run. 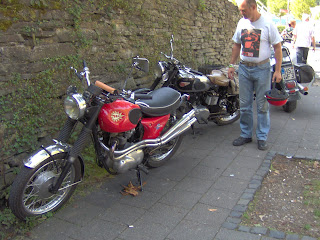 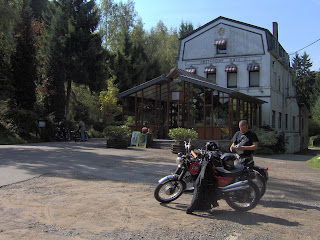 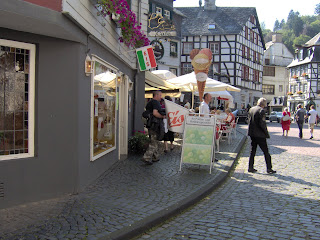 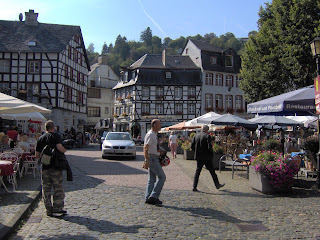 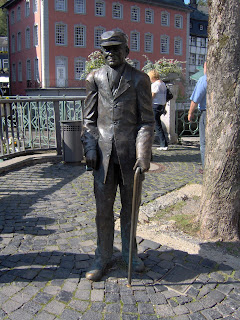 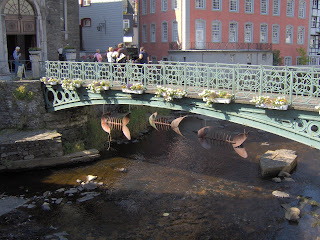 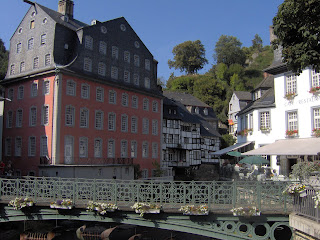 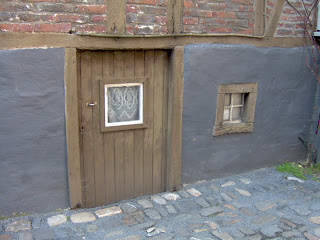 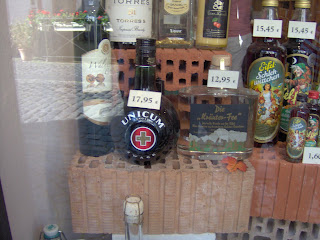 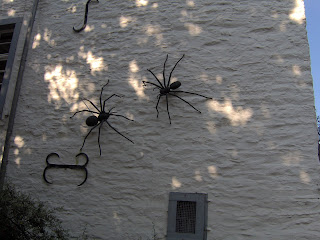 Just added a couple of piccies of the Lucas Night Run 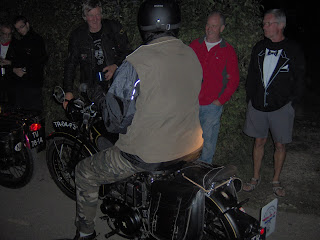 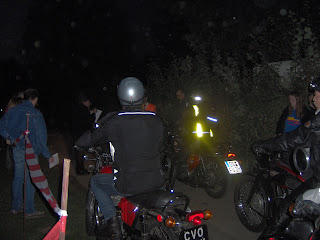